We go together like peas and carrots; green eggs and ham, John Lennon and Yoko Ono. But toll roads and preserving the environment? Yes, it’s true. (Cue the screeching brakes of car coming to a halt.) 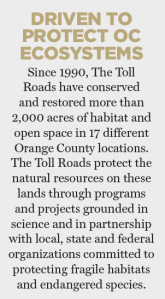 In the 1970s, when Earth Day was getting underway, studies showed the need for new roads to serve Orange County’s growing population. By 1981, the future routes for what would become The Toll Roads, were roughly sketched onto county road plans. By 1990, TCA was working with the Environmental Protection Agency, U.S. Fish and Wildlife Service, U.S. Army Corps of Engineers, California Coastal Commission, California Department of Fish and Wildlife and the Federal Highway Administration to secure environmental approvals and permits outlining the mitigation and restoration needed to move forward with construction.

Along The Toll Roads, nature’s bright show has been more than 25 years in the making. The slopes and nearby hillsides were first seeded with a mix of native plants back when The Toll Roads first opened. Custom seed mixes designed for each slope’s sun and moisture conditions sprouted into the mix of wildflowers, sages and shrubs seen today. The sustenance of the area’s California gnatcatcher population over decades is one way we know the planning and planting were successful. Today, the small birds nest in sagebrush and eat insects attracted to the wildflowers and other plants. The colorful spring views for drivers along The Toll Roads are just a beautiful bonus.