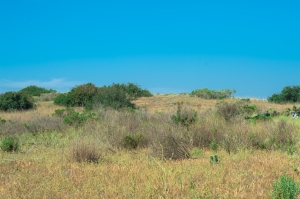 Twenty years ago, the Transportation Corridor Agencies (TCA) made history when they planted 122 acres of coastal sage scrub on the former Coyote Canyon Landfill in Newport Beach, Calif.  It was the first time that native habitat for an endangered species had ever been planted on a closed landfill.  Today, it is a thriving habitat that supports native wildlife and requires no maintenance.

“Coyote Canyon proves to everyone that habitat restoration that is carefully planned and flawlessly executed can produce great results. It truly is one of the great environmental success stories in Orange County,” said Rush Hill, mayor of Newport Beach and chairman of the San Joaquin Hills Transportation Corridor Agency.

Central Orange County’s solid waste was disposed of at the Coyote Canyon Landfill for 27 years (1963 to 1990).  During that time, more than 60 million cubic yards of waste were buried on approximately 395 acres. Since 1982, the gas produced by the decomposing waste has been fueling electricity production and currently generates roughly seven megawatts of power, supplying electricity for at least 6,000 homes for 32 years.

When it closed in 1990, Coyote Canyon Landfill’s closure plan was the first in the nation to include specifications to create habitat for a federally-listed bird species, the California gnatcatcher.  The landfill was designated as a special linkage for birds and animals between the San Joaquin Hills and Upper Newport Bay in the Nature Reserve of Orange County’s Natural Community Conservation Plan.

“TCA spearheaded the restoration of the Coyote Canyon Landfill as mitigation for construction of the 73 Toll Road and because it is a critical part of a comprehensive plan to provide a wildlife link from the Back Bay to the San Joaquin Hills,” added Hill.  “The goal was to establish a resilient habitat that needed no maintenance after initial establishment.” 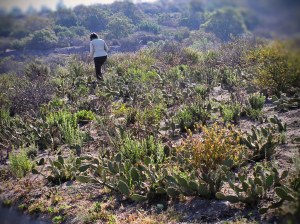 Coastal sage scrub — a low-growing, aromatic and drought-deciduous shrub found in coastal California — developed across the landfill after seeding in the fall of 1994.  Because coastal sage scrub includes deep-rooting plants, four and a half feet of soil was added on top of the Coyote Canyon Landfill to accommodate the habitat.  Soil monitoring was conducted to ensure the native plants’ moisture and roots did not negatively affect the landfill’s clay cap and gas recovery system.  The monitoring and resulting reports were the first demonstration in the southwest U.S. that native vegetation could be planted and maintained without compromising a landfill closure cover or gas recovery system.

The coastal sage scrub habitat has met all federal permit requirements and the performance standards established by the Biological Opinion issued by the U.S. Fish and Wildlife Service for the 73 Toll Road.

TCA has conserved and restored 15 locations in Orange County. Hundreds of birds and animals – including the California gnatcatcher – have found a safe home on TCA’s more than 2,100 acres of coastal sage scrub, wetlands, riparian and salt-water marsh.  At least 75 baby gnatcatchers, more than 40 species of birds, five species of rodents, 13 invertebrates and larger mammals such as coyote, bobcat and mountain lions utilize TCA’s habitat mitigation areas.

Since 1996, TCA has been a proud participant and active contributor to the Central/Coastal Natural Community Conservation Plan (NCCP), a reserve created to set aside 38,783 acres of prime habitat in Orange County for 42 individual species. During the three years it took to create the plan, TCA contributed its mitigation sites to the reserve and provided $6.6 million of a $10 million endowment, which funds the ongoing management of the reserve. The goal of the NCCP is to conserve native animal and plant species while continuing to allow appropriate development and growth. An estimated 699 acres of TCA’s mitigation areas are included within the reserve and the agencies plan to continue participation through ongoing oversight of the preserved lands.